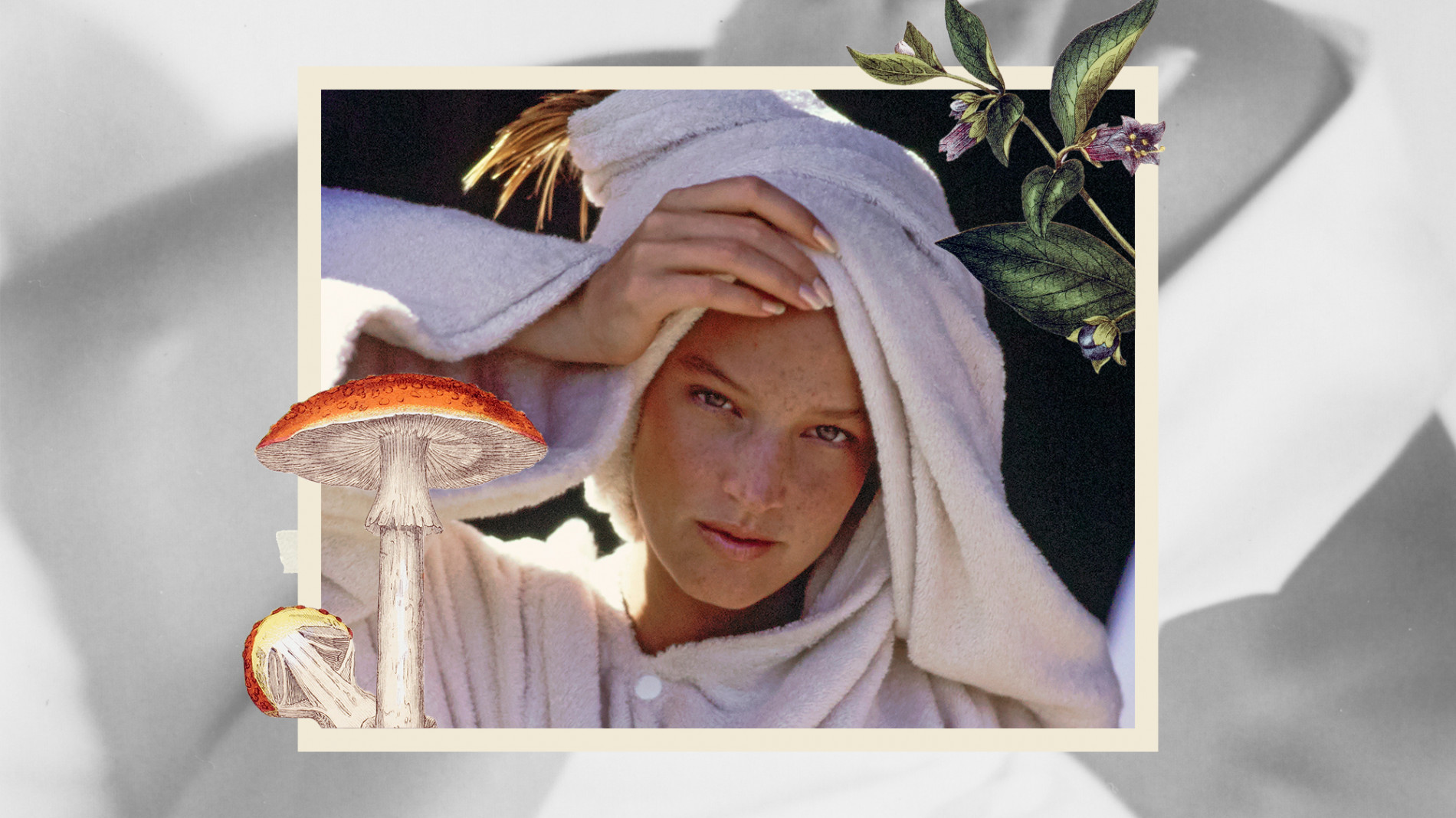 In the very long list of notable, natural skin-care ingredients, flowers and plant seed oils usually reign supreme as the most covetable. Understandable, considering that a formula brimming with, say, jasmine water and prickly pear seed oil sounds divine. But many times, with skin care, it’s not the “prettiest” plants that have the greatest benefits. In fact, one of the most in-demand ingredients right now is not one known for its external beauty. We’re talking, of course, about mushrooms. That’s right, a forest fungus is the new must-have for your complexion.

Shrooms aren’t exactly a new ingredient—they’ve been used in holistic wellness and Traditional Chinese Medicine for eons. But they haven’t exactly been at the forefront of the beauty scene. As Dr. Jeannette Graf, board-certified dermatologist and assistant clinical professor of dermatology at Mount Sinai School of Medicine, explains it, “Mushrooms have been around for quite some time; however, it was primarily in the world of health food stores as an oral supplement. Topically applied mushrooms took longer to catch on.”

You can thank Origins and their partnership with the iconic integrative medicine expert Dr. Andrew Weil for rebranding mushrooms from their prior woo-woo health supplement history into a mainstream beauty product. In 2005 the good doctor helped the brand formulate its Mega-Mushroom line, a collection of skin-care products created with the intention of fighting inflammation—which Dr. Weil attributed as the root cause of many skin concerns and irritations. The line featured formulas infused with a blend of mushrooms including fermented chaga, reishi mushroom, cordyceps, and coprinus.

Fast-forward 15 years, and mushrooms are now pretty much everywhere you look, from skin essentials to trendy wellness supplements, with new products and formulations launching what feels like every week. A slew of new products ranging from serums to sunscreens to foundation have hit the shelves over the past year, each prominently displaying this under-the-radar ingredient.

To help better understand just why shrooms have become so ubiquitous, we talked to skin experts, product developers, scientists, and brand founders on why all things fungi is 2020’s most buzzed-about natural ingredient. Keep reading to unlock the secret of magic mushrooms, plus discover some of our favorite shroom products for health and beauty.

“Mushrooms are rooted in Chinese culture and have been used in skin care and supplements for thousands of years, as they are associated with correcting imbalances and restoring vitality,” notes Regan Schneider, a food scientist and the founder and CEO of beauty brand Arêmês Fermentis.

Many mushrooms have adaptogenic functions, meaning they help restore homeostasis to the body, notes Michael Ahmad, Herbivore Botanicals’ national education manager. “They perform by targeting the body’s stress response (which originates in adrenal glands), supporting the normalization of hormone levels, and reducing inflammation. When applied topically, they offer localized benefits that help the skin resist environmental stressors and return to its peaceful baseline.”

Over the years, there have been many scientific studies and clinical trials that have confirmed the health benefits of mushrooms—renowned mycologist (read: fungi scientist) Christopher Hobbs, PhD, collected a very thorough review of medicinal mushrooms that cites over a hundred such studies. Basically, mushrooms have both ancient herbalism wisdom and modern-day scientific street cred to back them up.

“Mushrooms are their own powerful life form—intelligent, versatile, and undeniably beneficial,” explains Gabe Kennedy, co-founder of Plant People. “From immunity to beauty, there is an application for a [multitude of] mushrooms.”

Kennedy notes that there are over 14,000 species of mushrooms, and “each species has very different compositions. Some mushrooms can kill you, while others heal and nourish. Fortunately, over thousands of years of use and decades of science, we have been able to identify which mushrooms are best for what.”

Currently, there are seven mushrooms most commonly associated with beauty and wellness: chaga, reishi, shiitake, tremella, trametes versicolor, cordyceps, and coprinus. Each features their own unique benefits:

A potent adaptogenic with blood- and liver-detoxifying properties, chaga also contains a host of beauty benefits. According to Kate Seiberlich, founder of mushroom-based tincture brand Üphoric Urth, “Chaga mushrooms contain extremely high levels of antioxidants, ranking higher than more well-known fruits such as açai berries, blueberries, and pomegranates.” Those antioxidants help prevent skin oxidation and neutralize free radicals that can damage the skin. Chaga is also rich in betulinic acid, which Seiberlich says “accelerates the regeneration of tissues and skin while acting as an antiseptic, which can help to heal wounds. Betulinic acid has been used to treat skin infections and skin conditions such as eczema, psoriasis, and dermatitis.”

Commonly referred to as the “mushroom of immortality,” reishi, says Dr. Graf, “is most beneficial for beauty with its anti-inflammatory, anti-redness, antioxidant, anti-wrinkle benefits.”

Adds Schneider, “Along with its potent antiviral and antibacterial properties, reishi contains beta-glucans, which are responsible for attracting water from the environment to your skin, resulting in a healthy and hydrated complexion,” she explains. “This, in turn, creates the perfect groundwork for the synthesis of ceramides, which are the building blocks in the protective layer of your skin that keeps environmental aggressors out and hydration in.”

In addition to being arguably one of the most delicious mushrooms, shiitake, interestingly enough, also has skin-brightening qualities. Says Schneider, “The shiitake mushroom contains a high amount of kojic acid, which can help lighten areas of hyperpigmentation, fade dark spots and scars, and brighten your overall complexion over time.” Additionally, she notes, it also is rich in phytonutrients like selenium, vitamin D, and complex B vitamins to help combat the effects of inflammation. “One of the amazing phytonutrients that shiitake contains is the antioxidant L-ergothioneine,” she says. “This antioxidant can help prevent cellular breakdown and encourages a faster cellular renewal process, resulting in healthy collagen and elastin production.”

This spongy, squishy mushroom goes by a few names, including snow mushroom and silver ear mushroom, but the key benefit is the same no matter what you call it—hella hydration. “Tremella mushroom behaves quite similarly to hyaluronic acid—an ingredient considered by many to be the industry standard for hydration,” notes Ahmad. “It can retain up to 500 times its weight in water, making it a high-efficacy humectant. The distinction is that the tremella particles are even smaller than those of hyaluronic acid, allowing it to be more readily absorbed into skin.”

Sometimes referred to as turkey tail, this shroom is more well-known in the alternative health community as an immune booster; however, many product formulators are also finding it has some interesting applications in the beauty world. It’s considered an anti‑tyrosinase (read: it inhibits the production of melanin) to help minimize dark spots, as well as an anti-inflammatory that can help reduce redness and irritation.

There’s not much this fungus doesn’t do—it’s a potent source of antioxidants, can help hydrate dry skin, boost collagen, and elastin production, and has even shown some promise as a topical treatment for inflammatory conditions like eczema. Says Mariangela Sichmann, senior manager of product science at Dermalogica, “Cordyceps is known to promote health through its immune-modulating and energizing effects. It helps reduce one of the most important sources of skin aging—our reaction to daily assaults from the environment—by helping to reduce skin-damaging inflammation.”

Another antioxidant overachiever (noticing a theme here?), coprinus isn’t quite as well known as the others, but is by no means any less effective. It’s a favorite of Dr. Weil’s and a key ingredient in his Mega Mushroom line with Origins due to its ability to not only protect skin health, but also as a remedy for dryness and sensitivity.

Regardless of which mushroom you opt for, Kennedy notes that you want to be sure the products you purchase are using the “fruiting body” of the fungi, not the root structure (known as the mycelium). “The majority of the beneficial compounds are found in the fruiting body. The mycelium usually grows on grain, so often it is hard to separate the grain from the mycelium.”

As all of our experts noted, mushrooms are by no means a new discovery, yet many people are just now encountering them in their beauty routines for the first time. What gives? “The interest in plant-based ingredients is forcing a deeper discovery into non-chemical counterparts that are just as effective,” explains Schneider. “Mushrooms are filling that void, supplying ingredients like kojic acid in shiitake to replace hydroquinone for hyperpigmentation, or snow mushroom instead of hyaluronic acid for moisture retention. As time goes on and the interest in plant-based skin care continues to grow, so will the rediscovery of high-efficacy botanicals we just haven't paid enough attention to in the past.”